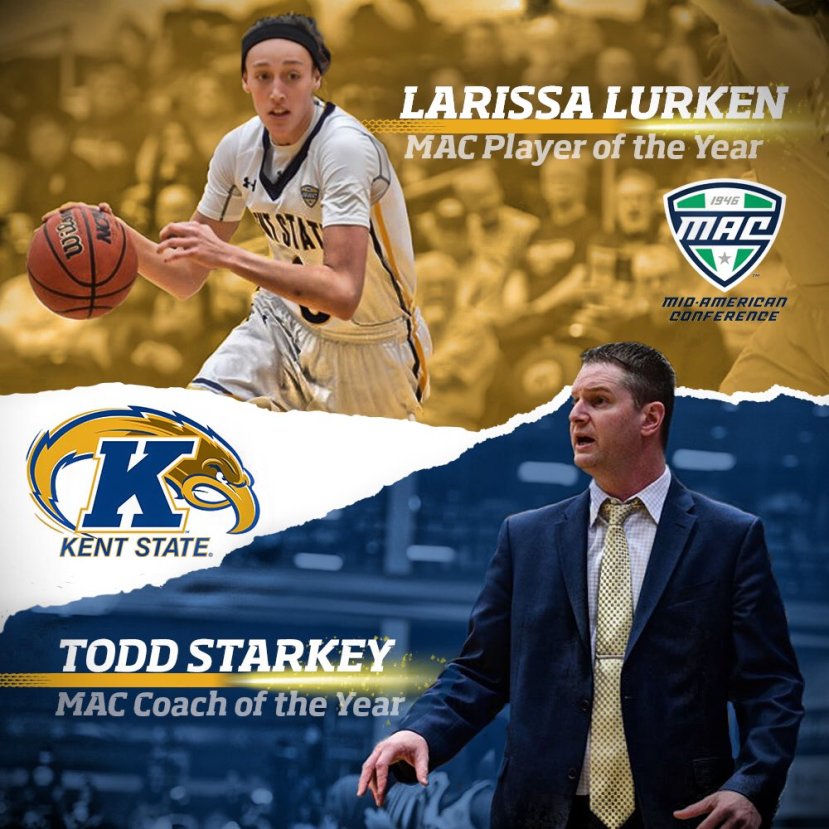 As I hoped and expected, Kent State coach Todd Starkey and senior guard Larissa Lurken got the top honors in MAC postseason awards.

Starkey, who became KSU head coach in April, is conference coach of the year. He took a team that was 6-23 and last in the conference a year ago and won the MAC East Division and went 19-11. The 19 wins are more than the last three years combined. He did that with exactly the same starting lineup from last season.

Lurken, a solid starter but not star for three previous years, had a spectacular senior season. She leads the MAC in scoring and almost certainly will break Kent’s 35-year-old record for most points in a season. She is averaging 23.6 points a game — more than any Kent State player, men’s or women’s — in history. She is first in the nation in free throws made and attempted. In both categories, she is 50 ahead of second-place Kelsey Plum of Washington, a leading candidate for national player of the year.

She is among MAC leaders in nine of 13 statistical categories, including blocked shots and rebounding, things she hadn’t been known for at all. Nor had she been know for drawing fouls; she’ll take more this year than in her first three years combined. In an interview earlier this season, she described it as “reinventing herself” as a player.

It’s very fitting that they both got awards because they couldn’t have done it without each other. Starkey brought a system that Lurken could thrive in and nurtured her to be a more aggressive offensive player and a good defender, again something she had never been known for.

Lurken, as Starkey said many times, “bought in” to the system almost from the day she met him. As the only senior in the starting lineup, she set the tone for her teammates.

Lurken also was on the all-MAC first team. (Barely mentioned this week is the fact she won her third MAC East player of the week award in a row, her fifth of the season and sixth of her career.)

Junior forward Jordan Korinek made the second team, something that would have been news all by itself. No Kent State player had made the first or second team since Taisja Jones and Jamilah Humes in 2011. Humes was the last first team member in 2010. Cici Shannon made the third team two years ago; Korinek was honorable mention last season.

Korinek had a mediocre preseason as she tried to figure out how to fit in the Starkey’s system, which used her quite differently than she had been in her first two years. Previously she spent most of her time in the post and foul lane; this year she moved inside and outside and did considerable screening to get her teammates and herself open.

In MAC play, she averaged 19.2 points a game, fifth in the conference and 0.1 out of third. Before January, she averaged about 11. Korinek also was 13th in the MAC in rebounding (7.1 points a game), fifth in field goal percentage (55.1), 10th in foul shooting (80.3) and 15th in blocked shots (0.7). All those numbers are for conference games only; for all games, she mades at least the top 15 but ranks somewhat lower.

Korinek and Lurken became Kent State’s 20th and 21st 1,000-point scorers this season. Lurken now has 1,619, eighth on Kent State’s all-time list. If KSU plays too more games, she’ll probably move up to sixth. Korinek has 1,129 points, 19th among all Kent State players. Remember she’s a junior; right now she has 218 points more than Lurken had at this time last season.

There were no surprises in the MAC year-end. No other Kent State player won anything; that was pretty much expected. My hopes for McKenna Stephens getting an honorable mention was a long, long shot.

Kent State’s Larissa Lurken received the top player honors, being names the 2017 MAC Women’s Basketball Player of the Year. This season, Lurken leads the NCAA in free throw attempts (309) and free throws made (262). The senior also sits 3rd nationally in points per game (23.6) and 6th in final points (708). The Cottage Grove, Minnesota native was the conference’s top scorer, recording 25.0 points per game. Additionally, Lurken was third in free throw percent (.876), fourth in blocked shots (29), sixth in steals (35 total), ninth in assists (3.8 apg), ninth in 3-point field goals made (38) and 12th in 3-point field goal percent (.358). The All-MAC First Team member becomes the sixth Golden Flash in program history to earn the Player of the Year honor.

Kent State University Head Coach Todd Starkey, was named 2017 MAC Women’s Basketball Coach of the Year. In his first year with the program, Starkey led the Golden Flashes to their first MAC East Division title since the 2004-05 season. Kent State finished the MAC season ranked third in free throw percent (.763), third in 3-point field goal percent (.350), third in assists (15.1 apg), fourth in scoring (75.2 ppg) and fourth in blocked shots (70). The Golden Flashes are first in the country for free throws made, with 566 on the season. They also sit second nationally in free throw attempts (757 total). Most impressively, Kent State, who was 6-23 overall and 3-15 in the MAC last seasons ago, went 19-11 and 13-5 in the MAC.  Starkey becomes the first Golden Flash head coach to be named Coach of the Year since Bob Lindsay won the honor in 1998. It is the third overall coach of the year in program history.

Receiving the title 2017 MAC Freshman of the Year is Miami’s Lauren Dickerson. The 5’3” guard ranks top ten in the MAC in assists (3.9 apg), steals (35 total), 3-point percent (.378) and 3-point field goals made (37). Over the course of the season, Dickerson started in all 32 games for the RedHawks, averaging 30 minutes. Dickerson finished her first campaign in Oxford holding the Miami freshman scoring record, which she broke in the final game of the regular season with a career-high 33 points against Western Michigan in the first round of the MAC Tournament. “Lauren is a special player and a great teammate,” said head coach Cleve Wright. “ She has obviously made an immediate impact on our team. Her passion to compete elevates her game and her teammates. She is worthy of this award and we are very excited for her!” The Indianapolis native led Miami in scoring (16.3 ppg) and steals (62). Dickerson becomes the second RedHawk named Freshman of the Year, joining Courtney Osborn.

Central Michigan’s Tinara Moore received the nod as the 2016-17 MAC Defensive Player of the Year. The 6’3” forward led the MAC this year  in blocks (64), which is a CMU single-season record, and blocks per game (2.1). Moore posted another program history with nine blocks in a single-game (vs. Northern Illinois). The junior ranks second on the team in rebounds (7.2 rpg) and has recorded 17 steals. “I think Tinara has really bought in to the discipline defensively. I think she is mobile enough and her numbers and performance speak for herself”, said head coach Sue Guevara. For the Chippewas, Moore is the second individual to claim the Defensive Player of the Year award joining Crystal Bradford in 2014.

Ball State’s Destiny Washington was named the 2016-17 MAC Sixth Player of the Year, becoming the third Cardinal to receive the honor. Head Coach Brady Sallee said, “I believe she elevates our team when she enters the game and used her role coming off the bench as a positive way to impact our team.” The sophomore leads the team in blocks (34), sits in third for total points (310) and is fourth in steals (33). The 5’11” guard averages 6 rebounds per game and 10.5 point per game in MAC play.

The All-MAC Second Team is highlighted by the 2015-16 Defensive Player of the Year from a season ago, Quiera Lampkins of Ohio. Lampkins sits second in the conference in scoring, averaging 19.5 points per game, and recently moved into No. 2 in all-time points scored in Ohio’s program history. Also on the second team were Ball State’s Moriah Monaco, Buffalo’s JoAnna Smith, Kent State’s Jordan Korinek and Toledo’s Janice Monakana.

On the third team it was Central Michigan’s Jewel Cotton and Reyna Frost, Toledo’s Mikaela Boyd and Jay-Ann Bravo-Harriott, along with Western Michigan teammates Breanna Mobley and Meredith Shipman.

wbbFlashes note: The vote totals are a little misleading. Media members were asked to rank their top three, with the first place getting five votes, second three and third one.

I mistakenly had Ball State’s Destiny Washington on my personnel all-freshman list that I wrote about yesterday. She is a sophomore.