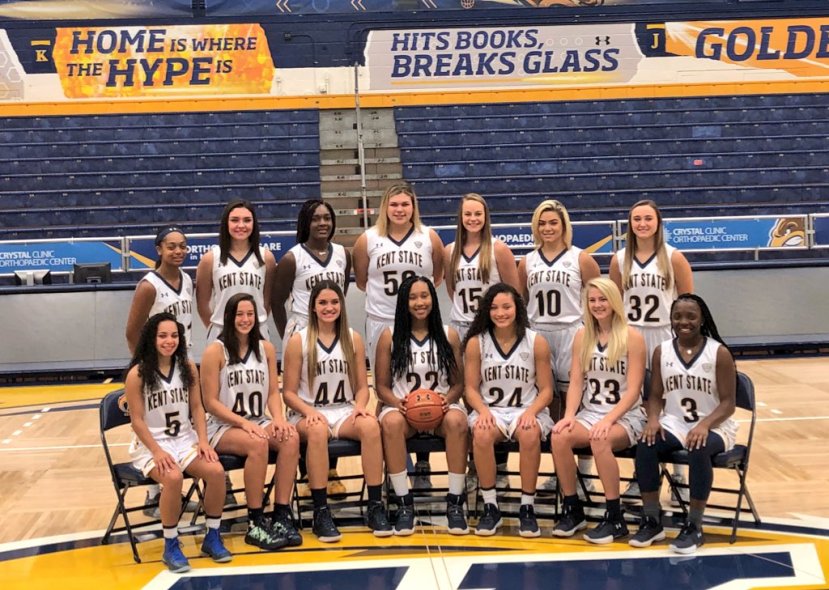 At a Kent State volleyball game earlier this month, I watched with a big crowd that included a lot of other student athletes.

At one break, I asked a group in front of me what team they were with.

Between games and practice, I’ve seen about as much of the team as any fan in the last five years.  I’ve written thousands of words about them. I’ve done dozens of interviews with team members.

But I didn’t recognize any of the four players in front of me.

We’re going to have to learn a lot of new faces this season.

Seven of the 14 players on the roster are new to the team this season. Five are freshmen, members of one of the best recruiting classes in school history. Two are transfers from top junior college programs.

Official practice for the 2018-19 season starts Sunday. The team’s first game is at North Carolina Nov. 9.

Coach Todd Starkey calls himself “cautiously optimistic” after working with the players since June. NCAA rules allow four hours a week of regular practices in summer and early fall, plus another six hours of conditioning.

“I think we’re further along than I anticipated,” Starkey said in a pre-season interview.

Starkey said the team devoted much of the summer to acclimating its new players to college level basketball.

The coach said the new players bring a different skill set and more athleticism than the players he inherited when he became head coach in April 2016. In his two years, every regular starter on his teams (32-32 overall) was recruited by former coach Danny O’Banion.

A quick reminder of the team’s personnel:

Gone through graduation are three four-year starters — leading scorer Jordan Korinek, forward McKenna Stephens and point guard Naddiyah Cross. The only other forward to see significant time the second half of last season, Zenobia Bess, talso graduated. Tyra James, who fought knee injuries for four years, and freshman Kasey Toles, transferred. Sophomore point guard Erin Thames, who was on the roster throughout the summer, wasn’t there when I checked Saturday.

Returning starters are guards Alexa Golden and Ali Poole. Guard Megan Carter was KSU’s first player off the bench last season and was second on the team in scoring (10.2 points per game). Also back after missing the entire conference season with a medical issue is 6-4 center Merissa Barber-Smith.

We’ll do a detailed position-by-position look at the team in my next post.

The newcomers give the team the most depth Starkey has had in Kent, and that opens up more possibilities offensively and defensively.

“The thing about quality depth is that you can roll the dice a little more,” Starkey said. “A lot of times on the perimeter last year we were relying almost exclusively on whether Megan Carter had a good offensive day. This year we’ve got a lot of shooters.”

On defense, he said, fans can expect “more of a risk-reward” style of play.

“We’ve been very conservative defensively our first two years,” Starkey said. “We didn’t think we had the personnel to be able to take a lot of risks. So we needed to defend the basket and tried to force teams to take tough shots,”

Defense, the coach said, has been the toughest adjustment for most of the freshmen. Most high school players learn a basic man-to-man or zone defense. Starkey’s Kent State defenses emphasize, for example, denying a player access to a spot on the floor as the other team tries to run its offense.

Starkey said the athleticism of many of the newcomers will allow the Flashes to be more free-flowing and less-scripted.

“This summer we let them play with minimal restrictions and have a lot of freedom to make mistakes and learn each other,” he said. “We wanted to establish what we’re capable of doing, learning each other, staying aggressive.”

The new players, Starkey said, have meshed well off the court, shown ability and carry themselves with confidence in practice.

But, he said, “I don’t want to get ahead of ourselves,” he said. “None of our freshmen have won a single game in college. There’s certainly talent there, but they’re untested. They haven’t proven a thing yet.”

All three of Starkey’s assistants got new titles this summer.

Fran Recchia is now associate head coach. It’s a title that has become popular over the last 20 years, and is a team’s top assistant. Recchia has essentially been doing the job since at least December 2017, when Pat Mashuda left after just seven months at KSU. Mashuda, like Starkey, was a Division II head coach in North Carolina (Chowan for Mashuda, Lenoir-Rhyne for Starkey). The Flashes ended their surprisingly 19-13 season with two assistants, plus director of basketball operations Allison Seberger. It was one more remarkable thing about a remarkable season. Recchia played basketball at Virginia Tech and was an assistant at Radford University in Virginia before she came to Kent State. Starkey said he has turned much of the scheduling of games to Recchia and included her more in the kind of administrative duties that could help her prepare to be a head coach.

Recchia turns her title of recruiting coordinator over to Morgan Toles, the Flashes No. 2 assistant. Toles joined Starkey’s staff after being a graduate assistant at Florida State. She was a starting point guard at Auburn and Florida State and coaches point guards at Kent State. In 2017, Toles was named to the Women’s Basketball Coaches Association (WBCA) Thirty Under 30 list, which recognizes 30 up-and-coming coaches age 30 and under. All the coaches recruit heavily, but Toles job includes  keeping track of players KSU is evaluating, make suring letters and emails get sent out to recruits, and coordinate visits to AAU tournaments.

Mike McKee picks up a new title of assistant coach for player development. McKee starred for KSU’s men’s team as a wing from 2006-2010 and was director of basketball operations — the almost-assistant coach who can’t recruit off-campus — for the men when Starkey hired him as an assistant a year ago. The move from from men’s to women’s coach is one Starkey himself made earlier in his career and is fairly unusual is college basketball today. Though a wing as a player, the 6-foot-6 McKee coaches post players for the KSU women. He would sometimes guard all-MAC forward Jordan Korinek (who was about 6-2 or 6-3) in practice last season.

Starkey praises his staff as often in interviews and called Recchia, Toles and McKee “three of the best young assistant coaches in the country” in the release announcing the changes. The coaches really do seem to like each other and their players and work well together.

The titles likely won’t change practice or game duties. They do more money; Kent State has a history of underpaying assistants in many sports.