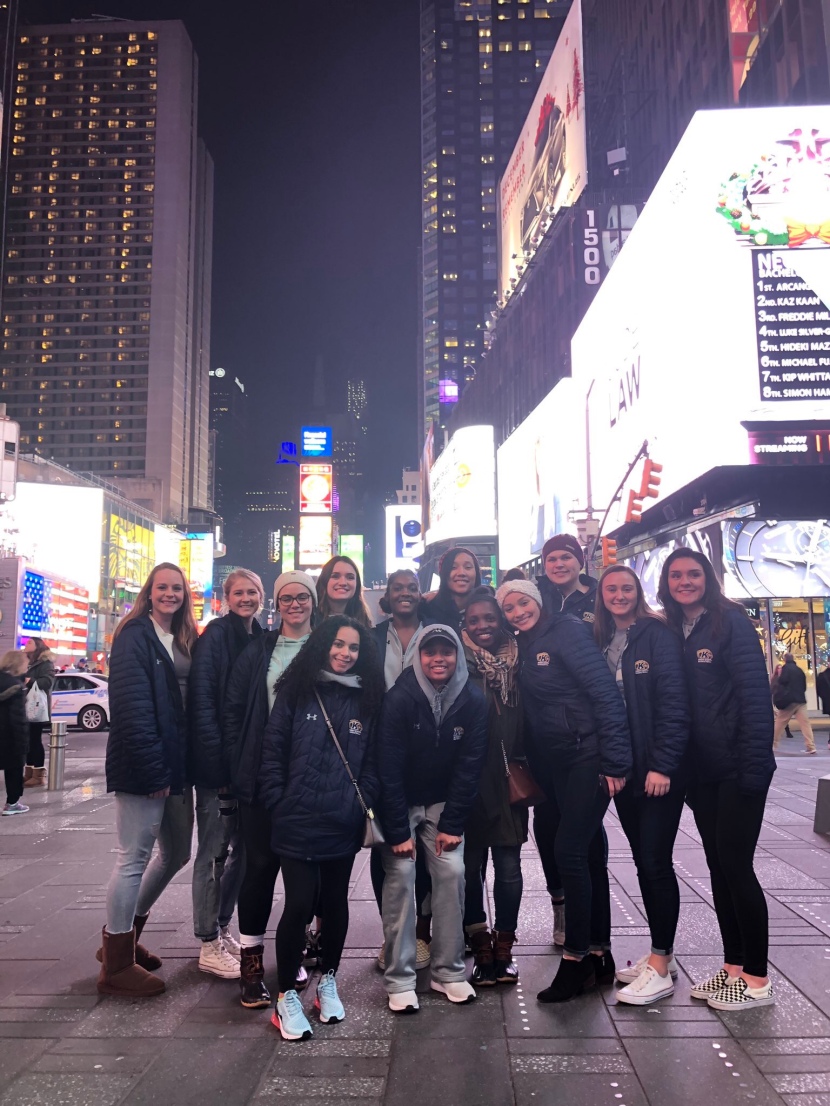 The Flashes in Times Square on their visit to New York for game against NJIT. (Photo from team Twitter feed.)

Kent State plays the New Jersey Institute of Technology Friday in its last Division I non-conference game of the season.

The game has an unusual 2 p.m. starting time.

The Flashes are 5-4 and have won two road games in a row against slightly better teams. KSU’s RPI is 140, seventh best in the Mid-American Conference.

Kent State is coming off its best offensive game of the season, a 76-64 victory over Saint Bonaventure.

“I was pleased with the win and how we’re improving,” coach Todd Starkey said. “But I feel like we still have a ways to go. That’s promising — to play a pretty tough non-conference schedule and be 5-4 and still feel like we haven’t played close to our best basketball yet.”

The Flashes are playing NJIT for the first time. The Highlanders are led by grad student Kelly Guarino, who scored 28 points with seven three-point baskets in NJIT’s 71-53 win against Colgate. Guarino is a 5-7 guard averages 14.6 points per game. 5-11 guard Danielle Tunstall averages 11.5 and 5-8 guard Ellyn Still 10.7. Grad student Tatianna Torres, another guard, is one steal away from the NJIT career record.

KSU freshman Lindsey Thall’s 14 points against Saint Bonaventure has moved her scoring averaging into double digits (10.1) for the first time this season. The 6-2 forward has never scored fewer than seven points this season.

The game starts at 2 p.m. Friday at NJIT’s Wellness and Events Center. Here are directions if you’re anywhere near the area.

Video is on ESPN Plus, which costs $4.99 a month. The service covers about 85 percent of KSU men’s and women’s basketball games and some KSU events in other sports. It includes access to many other MAC games and games in other conferences. Here’s a Kent State Q&A on ESPN+ and a link to this game’s webcast, which will guide you through a purchase.