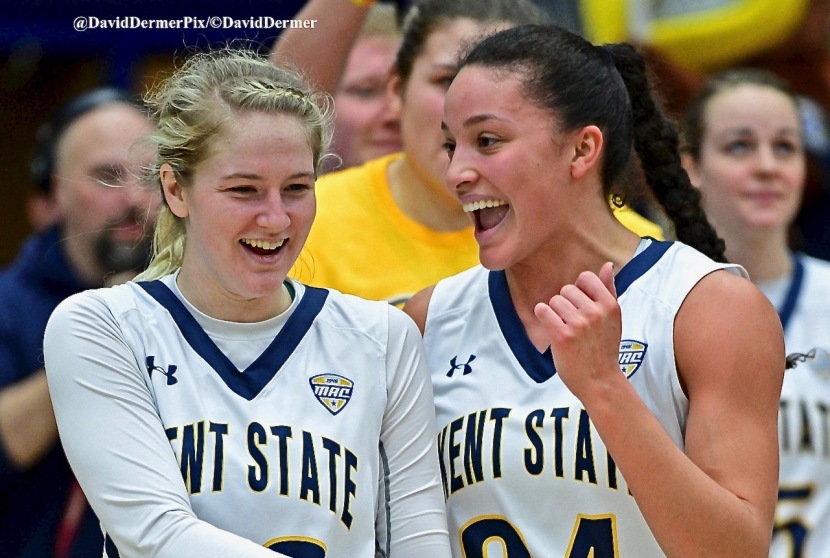 Ali Poole (left) and Alexa Golden are all smiles after the KSU win over Akron. (Photo by David Dermer from Kent State Twitter feed.)

In many different ways, Kent State got the complete victory it so badly needed Saturday in its 73-58 victory over Akron  at the M.A.C. Center.

But on Saturday they:

The victory leaves Kent State in a sixth-place tie with Northern Illinois at 4-4 and 11-8 overall. Akron is 3-5 in the conference and 12-7.

The Flashes had a week off since the Miami game and a chance to “reset,” as coach Todd Starkey called it in his pregame radio interview with Jacob Pavilack on Golden Flash iHeart Radio.

After the game, Starkey was a happy coach.

“We gave them two full days off at the beginning of the week.,” he said. “The rest of the week we got a lot of shots up. We work on our our ball movement. We worked on our shot selection and moving into shots as opposed to catching the ball stationary.

“Probably the biggest thing (for KSU’s good shooting) was just the rest for our legs and being able to make some shots early.”

Carter, who scored more than 20 points for the fifth time in six games, said the word for the week in practice was shooting.

“We shot the ball. A lot,” she said. “It was just getting in the gym and refocusing.”

And how much did she work on her own shot?

Carter made four three-point shots, a career high, in five attempts. She also led the team with six rebounds and four assists in 39 minutes.

Starkey said Carter “did a really good job of letting the game come to her and not forcing things.”

“We tried to play through her a little bit more,” the coach said. “The scouting report is for other teams to sag on Asiah (Dingle) and overcommit people to her. So instead of putting our focus on her getting downhill, we really tried to play actions through Megan.”

Thall led a defensive effort that held Akron to 24 percent shooting after the first quarter, when the teams combined for 47 points and 60 percent shooting. Akron scored 11 points in the second quarter and eight in the fourth.

Thall kept eight Akron shots from even getting to the basket. She admits that she’s not a great jumper, but she leads the MAC in blocked shots at 1.8 per game.

“I think just having long arms helps me out,” said Thall, who is 6-2. “I got acclimated to it in high school, being taller than everybody else. It’s exciting to be able to block shots at the next level, when everyone is so much taller.”

“She’s got excellent timing,” the coach said. “She made sure she was second to leave the floor and make them play through her hands. Her ability to defend at this level has improved so much.”

Thall also made three three-point baskets (she leads the team) and had 11 points, five rebounds and a steal.

The rest of the KSU defense also played very well after the first quarter. Led by senior Alexa Golden, KSU shut down Sefcik, who had been averaging 17.5 points a game, fifth in the MAC, and 3.44 three-point baskets, second in the league. Sefcik was three-of-16 from the floor and scored 10 points.

“Obviously a big part of the game plan was to limit Sefcik,” Starkey said. “We wanted to focus on their screening (designed to get the Akron guard open). We played with our hands high so she was limited in the number of threes she got off.”

The Flashes return to action at 7 p.m. Wednesday at the M.A.C. Center when they host Western Michigan, which has the third-worst conference record at 2-5.