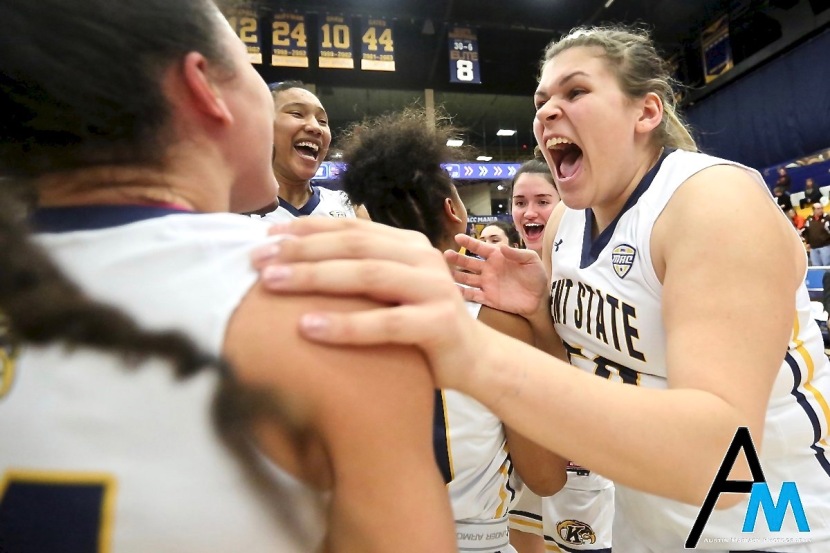 Sophomore Amanda Sape celebrates with seniors Alexa Golden (back to camera) and Merissa Barber-Smith (facing camera in background) after KSU’s win over Bowling Green. Barber-Smith had the best game of her career with 20 rebounds and 10 points. (Photo by Austin Mariasy)

Kent State’s women’s basketball team is doing what every team wants at this time of the year — playing its best basketball as it starts postseason play.

The Flashes pounded Bowling Green 86-62 Wednesday at the M.A.C. Center in the first-round of the Mid-American Conference Tournament . They advance to play fourth-seeded Buffalo at about 2:30 p.m. Wednesday at Quicken Loans Arena. KSU is seeded fifth.

Kent’s record is 19-11 and equals its total from two years ago, when the Flashes won the MAC East Division in coach Todd Starkey’s first season.

Bowling Green was the MAC’s last place team, but it had beaten Kent State 62-49 at BG nine days ago.

Since then, the Flashes have played three of their best games of the season — a 65-55 overtime victory at Akron, a 62-53 win over Buffalo at home Saturday and Monday’s rout of Bowling Green.

“Losing at their place may have ended up being a blessing in disguise,” Starkey said. “It got our attention. We came out and started really well, and we told them at the end of the first quarter, ‘This is who we are. This is what we’re capable of all the time.’ ”

The Flashes led 25-7, and Bowling Green never got closer than 16 points after that.

“We’ve said since the beginning of the year that if we can put together four good quarters of basketball, we have a chance to be a really nice team,” Starkey said. “And that’s what we’ve been doing lately, which is nice because it’s the right time to start playing your best basketball. We’ve shown more consistency on both ends of the court — better offensive execution and pretty rigid bend-but-not-break defense.”

If the Flashes played one of their best games of the season, senior Merissa Barber-Smith played the best game of her life.

She grabbed 20 rebounds, tying Cici Shannon’s total of three years ago for seventh highest in school history. The last time anyone had more was in 1992.

Barber-Smith scored 10 points for the first double-double of her career in her last home game.

Starkey kept her in the game to make sure she got the double-double and the 20th rebound.

Rebounding, she said, was no problem.

It was the middle of the fourth quarter and she had grabbed one of her nine offensive rebounds.

And, of course, it did. Barber-Smith, who at one point this season was shooting less than 35 percent from the field, made 5-of-6 field goal attempts. Against Buffalo on Saturday, she made 4-of-5.

Her shots have been putbacks of offensive rebounds and short-range shots. On one play Monday, she took a pass from guard Asiah Dingle and laid it in.

“20 rebounds is ridiculous,” he said. “I’m really proud of her. She’s always been a talented rebounder and shot blocker. She’s getting more minutes now that she’s in good game shape. She’s executing better offensively so we can keep her on the floor longer, and she’s feeding off of that. She’s playing with more confidence, and we’re just letting her go with it.”

When Barber-Smith came off the court after her 20th rebound, her teammates met her with cheers, and fans gave her a standing ovation.

“The rest of our players really want to send Merissa and Alexa out on as high a note as possible,” Starkey said. “That’s a great thing for a coach to see — that a team cares so much about their seniors that they’re willing to give everything they have for them.”

“Alexa” is fellow senior Alexa Golden, who had nine points but played a near-season low of 20 minutes because of foul trouble. She had been averaging almost 35 in conference play, so the fewer minutes might even have been good for her and the team. She’s been playing on sore and tired legs.

Dingle scored 25 points, four off her season high, equaled her freshman-year high of six assists and had four steals. She made 7-of-13 field-goal attempts, a definite positive for her. Her shooting percentage has been below 40 for most of the conference season, in large part because her signature drives to the basket sometimes led to out-of-control shots.

“I’m definitely trying to keep my eyes up to look for the rim and to look for the open player,” Dingle said. “If I see an open lane, I’ll take it. If everyone is focused on me and the ball, I know I have Mer or Lindsey inside or Megan and Lex at the three-point line.”

Starkey said it’s something the coaches have been pushing.

“She’s been dong a good job of picking her spots and not just driving with blinders on,” he said. “We’re really trying to get her in spots where she can drive early when the defense isn’t set, or after we’ve executed something on offense and she’s catching the ball after the second touch.”

The coach said the team is moving the ball better on offense and was delighted that his team had 16 assists on 31 baskets. It was the second straight game the Flashes have had assists on more than half their baskets. That has happened 13 times this season. KSU has won nine of those games. The losses were by two-point twice to second-place Ohio, once by nine points to Buffalo and by five points to Duquesne, a team that is 19-13.

KSU’s 16 assists were its second highest of the season.

“That’s huge for us,” Starkey said “It means we’re really sharing the ball. We’re playing with more maturity on the offensive end right when we need it the most.”

(at Quicken Loans Arena in Cleveland)

Games start a half hour after the previous one ends.

Friday’s semifinals (at the Q)

(All games on ESPN+)

Saturday’s finals (at the Q)

The Kent State Women’s Basketball team has advanced to the Quarterfinals of the MAC Tournament. The game will take place Wednesday, March 13, at Quicken Loans Arena in Cleveland. Tickets for the game are $10.

The Women are the #5 seed and will take on Buffalo, the #4 seed, in the second game played on Wednesday. Tip-off for that game depends on the ending of the first game but is estimated to begin around 2:30 p.m.

To reserve your tickets for the game, you can call the Ticket Office at 330-672-2244 between 8:30 a.m. and 4:30 p.m. on Tuesday, March 12, or click here. We will be accepting orders until 4:30 p.m. on Tuesday. Different than years past, all tickets will be picked up from the Kent State table inside the Media Entrance of Quicken Loans Arena (SouthEast Corner/Progressive Field side). You will go through security first, and then receive you ticket at the table.

For everyone that purchases tickets for the Quarterfinal game, we will send an email regarding what time those will be available for pick-up at the arena.

Kent State Alumni and Fans…Join the Golden Flashes Club for a pre-game FLASH fan reception, beginning 90 minutes prior to any tournament Women’s game, March 13th-16th at Flannery’s Pub, a short walk to Quicken Loans Arena. Complimentary appetizers while they last will be served.

If you want tickets straight from the MAC, here’s a link to its tournament page, which also the bracket and statistics. You also can buy premium seats.

One ticket is good for all of the women’s games for that day.

Students can get free MAC Tournament tickets and and a bus trip to Quicken Loans Arena in Cleveland for every men’s and women’s Golden Flash basketball games. Students can reserve a bus spot for each potential game with a $10 Deposit per seat per game.

Reservations will can be made on Tuesday, March 12, from 11:a.m. to 1:00 p.m. in the Student Center on the Second Floor. Student ID’s required with a $10 cash deposit per seat / per game. Seats are limited.