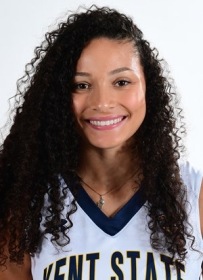 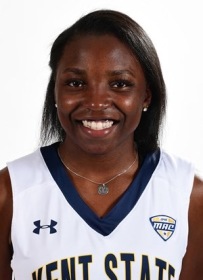 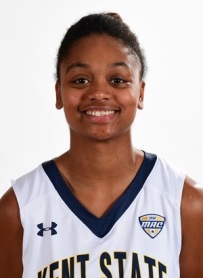 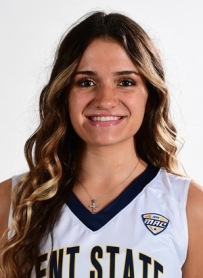 The awards were announced today parallel with the start of the MAC Tournament this week.

Central Michigan’s Reyna Frost was player of the year, Central coach Sue Guevara coach of the year and Ohio’s Erica Johnson freshman of the year.

Media members (including me) voted on the coaching, player of the year and freshman of the year honors. Coaches chose the rest.

We each picked a first, second and third choice. First choices earned three points, second two and third one. (That’s what the numbers mean after a player’s name. The first is first-place votes, the second total votes.)

Here are the award winners, with some commentary from me in italics.

MAC Player of the Year

In most years, Frost, Dillard or Central guard Presley Hudson easily would have won the award. We just got three big-time players in one years.

Dillard is second-leading scorer in the country (25.0 point a game) — and the second-best player in the MAC. Hudson was my preseason prediction for player of the year. She has been a terrific shooter and a terrific playmaker since her freshman year. (I don’t know why she’s not on the MAC’s list. She was listed on my ballot, and I voted her third; perhaps they wouldn’t put two from the same team in the finals.)

Coach of the Year

Guevara was the best coach of the league’s best team, which usually wins the award. I voted for Bob Boldon of Ohio; his team played above expectations more than any other. That’s my definition of good coaching.

Starkey did a very good job this year, taking a young team and winning 19 games (and counting).

Freshman of the year

Kent State’s Dingle (and Lindsay Thall, who wasn’t on the ballot for some reason) were great freshmen. But Ohio’s Johnson did it all. She was the highest scoring freshman in the league (15.2 points per game) and rebounding (6.9). She was among the top 20 of all players in field-goal percentage, free-throw percentage, assists, steals and 3-point baskets per game, Johnson redshirted her freshman year after reinsuring her knee late in her high school career.

Sixth Player of the Year

It’s a stretch to call her a sixth player. She started 16 games and most of the conference season.

Defensive Player of the Year

I was pulling for Kent State’s Alexa Golden, but she did make the all-defensive team (below). But Hooks is very good.

Dingle and Thall are Kent State’s first players on the all-freshman team since Chenel Harris in 2008.

It’s the third time KSU has had multiple players on the team. Michelle Burden, Kathy Carroll and Tracey Lynn all made it in 1991. Gwen Hurley and Carrie Templin made it in 1995.

Golden’s is the one award I most wanted for Kent State. She’s been the soul of the team’s defense for four years and had never made the all-defensive team.

I had Toledo senior center Kaayla McIntyre instead of Dickerson.

Nice to see Carter here. She worked so hard on her consistency since last season. In preseason, Starkey said she could be an all-MAC player. He was right.