That was taking up where they left off in high school, where the three scored a combined 4,500 points (exactly) and made a total of eight all-state teams.

On KSU’s trip to Vancouver, Blackford led the team in rebounding (7.7 per game); Shumate was second at 7.3.

Shumate was second in scoring to sophomore point guard Asiah Dingle at 12.3 points per game, second in steals and blocked shots and third in assists.

“Our three freshmen can score at a much higher than the two seniors we lost to graduation,” coach Todd Starkey said in an interview before the trip.

None is likely immediately to be Kent State’s voice on defense, as was guard Alexa Golden, a member of the MAC all-defensive team who ranked among conference leaders in steals, rebounding, assists blocked shots and minutes played. But Golden, now a graduate assistant with the team, averaged 7.6 points per game.

None is likely to get 20 rebounds in a game, as did 6-4 Merissa Barber-Smith against Bowling Green in the MAC Tournament. Barber-Smith led KSU in rebounding with 7.6 per game in less than 18 minutes per game. But she averaged just three points a game.

Shumate and Blackford “could put up 12 and 12 (points and rebounds) in a game,” Starkey said.

Kelly made 37% of her 3-point shots in high school. That’s more than a percentage point higher than sophomore Lindsay Thall did her senior year, and Thall led the MAC in 3-point percentage last season.

All three have been impressive in conditioning and the weight room, too. Kelly set a team record by lifting 100 pounds 23 times. Shumate had the team’s best vertical leap at 10 feet 2 inches, with Blackford close behind. Katie won the team’s mile run, and Blackford the team’s three-quarter-court sprint. 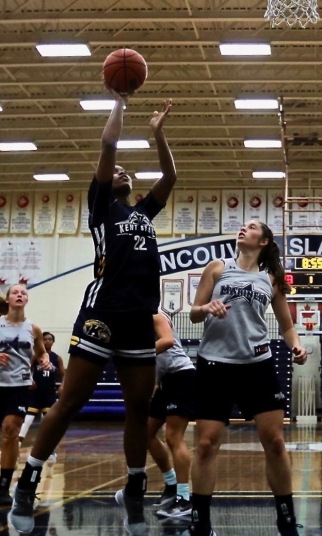 “Nila has the ability to play multiple positions, mostly forward and wing. She’s probably our best offensive rebounder on the team already. She is developing consistency in her perimeter game, can drive and has a knack for scoring in transition and around the basket.”

HIGH SCHOOL: First-team all-Kentucky, one of 16 regional players of the year, which made her a finalist for Miss Basketball in Kentucky. Averaged 19.3 points and 10.9 rebounds and shot 48.5% from the field. Her team went 21-10 and lost in regional final. In four years, Blackford played in four regional finals and two state tournaments. In her high school career, she had 1,499 points and 939 rebounds.

“A very talented and gifted athlete, one of the best I have had the pleasure to coach. She faced double and triple coverage in the majority of our games. I really saw her grow in her ability to score in different ways and play with a confidence that allowed her to not get rattled against the pressure she saw every night.”

STATS FROM VANCOUVER: 29 points, four assists, 9 of 18 three-point shots. Had 12 points, two assists and a steal against British Columbia.

“Claire has a really high basketball IQ and understands the flow of the game. She sees the floor; she’s a great passer. She’s come in shooting the ball with a lot of confidence,”

“Clare Kelly has unlimited range from 3. There are plenty of player who love winning…Clare hates losing.”

“Katie has the ability to play four positions. She’s got enough basketball IQ and ball handling ability to play the point. She’s athletic and long enough to defend fours (forwards) and play the four spot we need her to. She’s done a really good job of attacking the basket and scoring in transition and rebounding from the guard position.”

HIGH SCHOOL: Second-team all-Ohio as senior and junior, first team as sophomore. District player of the year as junior and senior. As a senior, averaged 15 points, six rebounds, four assists and three steals aand shot 50% from the field on a team that went 24-4. Over four years, her high school teams went 96-15 and won four district and one regional titles. Scored 1,365 points in four years, fourth best in program history. Second in steals, fourth in assists, ninth in rebounding in school history.

From her father and high school coach, J.R. Shumate, as quoted in the Newark Advocate:

“With her stats, you’d think she was a post player. The thing that stands out in her career is versatility. She led us in eight different categories this year.”

From Kurt Snyder, sports editor of the Newark Advocate, her hometown paper:

“Has nice touch in the paint, at the line and from 3-point range. Uses her length and instincts to get a ton of steals and deflections. Is a good shot blocker and defensive rebounder for a guard.”

Full roundup from the team’s trip to Vancouver.
An early preview of the 2019-20 Flashes.