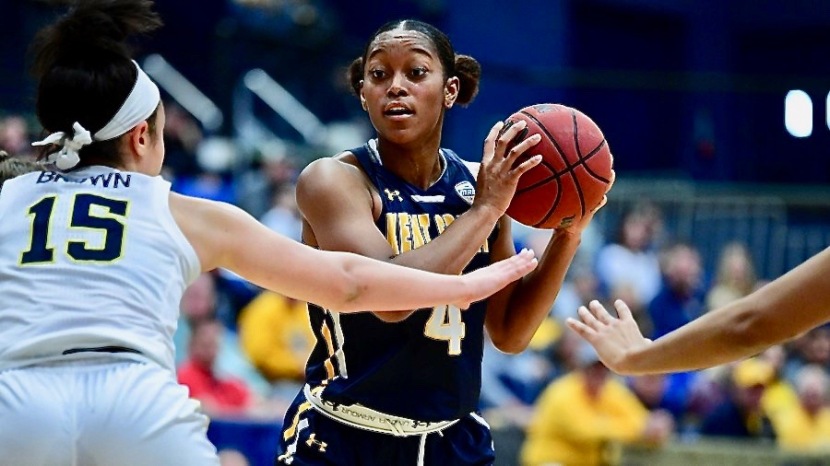 KSU’s freshman Nila Blackford had her second double-double of the season with 14 points and 10 rebounds. She’s led KSU in rebounding every game. (Photo from team website.)

Kent State had been looking for a spark off the bench all season, and got a good one Saturday from sophomore Hannah Young.

Young led a third-quarter rally that saw the Flashes make their first 11 shots from the field after halftime. Young went four for four with a 3-point basket during that time.

KSU’s shooting cooled in the fourth quarter, but the Flashes made all 14 of their free throws in the last two minutes to post a 75-67 win over Purdue Fort Wayne.

“I knew we could use a little bit of a spark,” Young said, “and I came out with every thing I had.”

How does it feel when every shot is going in — for her and the team?

“Honestly, you take your shot and you forget what just happened. Then you keep on going and keep playing your game.”

“We always talk about that — you never know what it’s going to be your opportunity,” he said. “And certainly it was hers today., and she took full advantage of it. So I’m really pleased. She’s been working hard.”

Even though Kent State led for all but 15 seconds of the game, it was probably the team’s  worst game in its three victories. The Flashes made 22 turnovers — seven more than their  next highest. Fort Wayne had only 12, the fewest an opponent has had all season, though somehow Kent State outscored the Mastodons 13-12 from turnovers.

“We got careless,” Starkey said. “We weren’t playing connected with each other, and we didn’t execute our press offense very well.”

The cure, freshman Katie Shumate, said, is to “slow down, get set up and stop thinking too much.”

“Having that many turnovers is not going to get us where we want to be.”

Fort Wayne had lost to fellow MAC school Ball State by 31 points and to Akron by 11.

“We’re finding ways to win, but we definitely have a large margin for improvement,” Starkey said. “We have to play much more disciplined on the defensive end. We had way too many turnovers. We gave up way too many offensive rebounds.

“This team is young, but we have to continue to grow.”

The key, Starkey said, is more consistency in games and in practice. How does the coaching staff teach consistency?

“By the discipline that you have in practice every day. So we gotta got gotta tighten the screws a little bit in practice and not letting them get away with some things. We’ve  tried to be patient because of our youth, but sometimes when you’re when you’re a little bit too patient, some complacency creeps in.”

Asiah Dingle led KSU with 17 points. Nila Blackford had her second double-double of the season with 16 and 10 rebounds, and Katie Shumate scored 16 points and had three steals. Young and Lindsey Thall had nine points and Megan Carter eight.

Next for the Flashes is their second Big Ten opponent in five days.

Ohio State visits the M.A.C. Center Thursday for the the teams’ first game in 37 years. The Buckeyes are 2-0, including a 78-73 overtime win at Cincinnati. They play MAC favorite Ohio in Columbus Sunday.

Thursday’s game starts about 7:30 p.m. and is the second game of a doubleheader with the KSU men, who play Division II Concord at 5 p.m.

The Zips led No. 24 Michigan going into the fourth quarter, but the Wolverines outscored Akron 25-13 the rest of the game to win 80-71.

On Saturday the Zips made the 3-point shots Kent State had missed the previous day. Michigan had a far lower 3-point percentage than against KSU.

Akron trailed by 15 in the first quarter but rallied to trail by seven at halftime. Then the Zips outscored Michigan 24-14 in the third quarter, finishing the period with two 3-point baskets to take a 68-65 lead.

Michigan went ahead 62-61 on a three-point play two minutes into the fourth quarter and controlled the rest of the game, shooting 70% in the fourth quarter. Against Kent State, Michigan shot 75% in the last 10 minutes.

For the game, Michigan made 59.6% of its shots, even better than the 54.7% they shot against Kent State. But the Wolverines were two of 10 from 3-point distance for the game. Against Kent, Michigan was nine of 17.

Akron is 2-1 on the season. Michigan is 4-0 against four mid-major teams, three of them from the MAC. (The Wolverines beat Western Michigan 76-55 in their opener. They play Notre Dame Saturday and at Eastern Michigan, another MAC team, Nov. 27.)

More on the game is on the Akron website.

An earlier version of this story said Kent State made 12 free throws in the last two minutes. I counted wrong. It was 14.