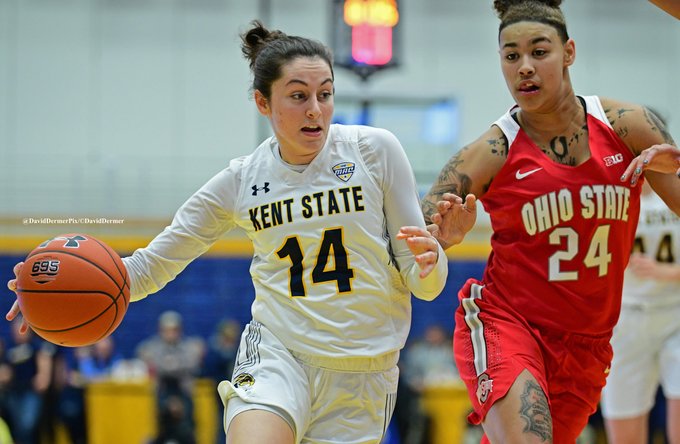 In conference play, Katie Shumate is averaging 13.8 points and 7.0 rebounds. She’s shooting 46% from the floor and 50% from 3-point distance. (File photo from KSU website.)

The Flashes had their midweek bye this week, but coach Todd Starkey and the team have been busy.

Starkey spent much of the week in Texas, where he’s recruiting two topflight guards. The NCAA doesn’t allow coaches to talk about players they’re recruiting, but both have tweeted their offers from KSU. One is a 6-1 wing, the other a 5-10 guard who can play the point or shooting guard.

Both graduate in 2021. Starkey has said that will be an important recruiting class because the players and the next year’s class will be taking over after the team’s six-person sophomore class graduates. That class has provided starters Asiah Dingle and Lindsey Thall and top reserves Mariah Modkins and Hannah Young. Indiana transfer Linsey Marchese joins them as juniors next season, and she’s likely to play major minutes.

Starkey took time Thursday for a wide-ranging interview before his team practiced Thursday night for their Saturday game with Buffalo at 1 p.m. at the M.A.C. Center.

“They’ve got the second-leading scorer in the MAC and leading freshman scorer in the country in Dyaisha Fair. She’s a problem. She has the ability to more than just score. She’s one of the leaders in the conference in assists and a very good rebounding for a guard.”

“Therese Onwuka (a 5-10 guard averaging 15.5 points and 7.3 rebounds) is a heckuva a player and a senior. She’s been in NCAA tournaments and has experience in big games. Hannah Hall (5-3 senior point guard) has knocked down big-time shots in the league and post-season.

“Buffalo is a very dangerous team. They have that championship mentality.”

The Bulls have gone to the NCAA tournament the last two years, reaching the Sweet 16 in 2018.

“Ball State is a very tactical team and the best defensive team in the league. They have the ability that can take things away from you. They certainly did something against us as well.”

(The Flashes lost at Ball State in their conference opener by a very similar score, 66-62.)

“Just because Ball State is able to do certain things to Buffalo doesn’t mean we can. We don’t have the same personnel. We have to come up with a game plan based on what we feel we can do well.”

On the state of his team after winning three in a row, including two on the road:

On assists, which has been a weak area statistically:

“If you’ve got players who can create for themselves, your assist total might be a little lower because they don’t need somebody else to get them to that point. It’s more about field goal percentage and where we’re getting our shots from and things like rebounding margin — all those different things that go into winning and losing games.”

On the team seeing big leads dwindle in the late minutes on the road:

“Obviously we have to be able to have them handle pressure a little bit better. Some of that just comes for being in it and learning each other and getting better. We still have a lot of room for growth.

“And if you’re young and you’re finding ways to win tough games on the road, I that’s a good sign.”

On how the team has missed Megan Carter and Ali Poole:

(Carter has missed three games with mononucleosis. Poole suffered a partial ACL tear in summer practice, played with a brace for 13 games, then blew the entire ACL diving for a ball against Western Michigan. Her playing career is over.)

“We lost two senior starters. If Ali’s 100% healthy, she’s playing in those games down the stretch because of her experience and her composure and her voice and knowing where to be. And that changes things significantly.

“And not having Megan — your fifth-year senior ball handler —  on the court coming down the stretch where teams are pressing….those are significant things.

“We’re starting three freshman and two sophomores in one of the toughest leagues in the country. It’s not always going to look pretty, but I’m pleased with the progress that we’ve made.”

On when Carter will be back:

“That’s going to have a lot to do with how practice looks the next couple of days. But I certainly am not getting that information out before we play Buffalo. I don’t want them to be able to game plan for her.”

All have seen playing time increase significantly in recent games, even before Carter left the lineup.

“They’ve been getting better results in practice and playing better when they get minutes in games. So that directly leads to more minutes. And we’re trying to find some balance and bench scoring and getting some players rest.”

On what the team did in the bye week:

“With this young team, mental, medical and physical rest is really important. They did some individual workout stuff with assistant coaches. Assistants had full practice was yesterday and the day before. The nice thing about having continuity on your staff is they know what you want. In a typical week we play on Wednesdays, so they did a lot more up and down yesterday.

“And they’ve already been at work on Buffalo a little bit.”

On the team going forward:

“The biggest thing between us and being in the top four in the league on the stretch is just consistency. That just comes from learning. I’m hopeful that we’ll continue to get better.”