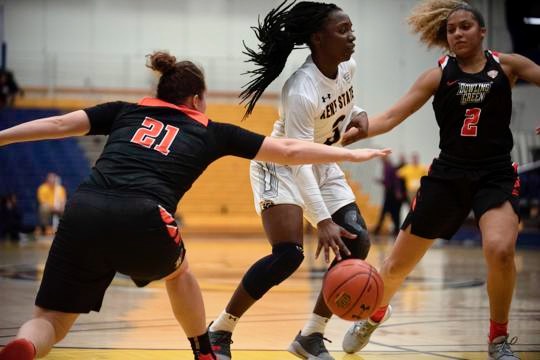 Guard Asiah Dingle is making 45% of her shots this season, up more than six points from last year. She’s also averaging an assist more per game in about the same playing time. (File photo by KentWired’s Gina Schlegel.)

Game is at 7 p.m. Wednesday, Feb. 12, at the James A. Rhodes Arena in Akron. It’s about a 20-minute drive. Address is 373 Carroll St., Akron, if you need it for GPS. Here are directions from the Akron website. including parking information.

We’ll skip the cliches on bragging rights and rivalry game.

With eight games left in the conference season, all games are important. Akron is below Kent State in the standings, in RPI and in Power Rating. The Flashes need to win to stay in contention for a top-four finish and a first-round bye in the MAC tournament.

Akron needs to start winning games in order to climb to eighth or higher in the conference. That would give it a first-round game at home in the tournament.

The Zips had one of their best non-conference seasons is recent years at 7-4. They’ve been competitive in almost every MAC game; nine of their 10 games have been decided by eight points or fewer.

The winner of the game gets a half point in the Crystal Clinic Wagon Wheel Challenge, which scores head-to-head competition in all sports. Kent State leads in this year’s challenge 3-2.5. Akron has won he last four years, all by 7.5 to 6.5 scores. The Wagon Wheel itself goes to the winner of the football game between the two schools and currently lives in Kent.

Kent State’s defense has been good in recently games, but the Flashes need to get their offense back in gear. They’ve averaged 58 points over the last five games, never scoring 70 points. But opponents haven’t scored 70, either, and last week KSU held Bowling Green to a season-low 47 points and Ohio to 63. its lowest in MAC play.

“In the beginning of the year, I thought we were doing a really good job, averaging more points per game than we ever had,” coach Todd Starkey told the Record-Courier’s Allen Moff this week. “Then teams kind of figure you out a little bit.

“I don’t think we’re running bad offense. We’re just struggling to make shots right now. It’s nice to see our defense starting to shape up into form at the right time of the year when that needs to happen.

“If both sides of the ball at some point can finally come together, I think we have the potential to be one of the best teams in the league still. Until that happens we’re kind of stuck right there in the middle with a lot of other teams that are trying to have a little breakout here at the end of the season.”

Four Flashes average in double figures in MAC play, and a fifth, forward Lindsey Thall, is close at 9.1 Six players have led Kent in scoring this season:

As you’d expect from its record, Akron is average or below in every statistical category. The Zips are best in defense, where they are fifth in points allowed and fifth in field-goal defense.

Akron starts three seniors and two juniors, which makes it the most experienced starting lineup in the MAC. 6-2 senior forward Haliegh Reinoehl is second in the MAC at 9.2 rebounds per game and scores 15.9. Jordyn Dawson, a 5-11 transfer from Wabash Valley College, averages 13.2 points and leads the Zips in assists and steals.

The two teams rank at the bottom in scoring in the MAC. The better defense is likely to win.

All statistics are for conference games only, which are more current and reflect similar competition.

Following the game from home

Video stream on ESPN+ starts at game time at 7 p.m. Service costs $4.99 a month and includes about half of all MAC men’s and women’s games. (Others are mostly on ESPN3, which is free.) This link takes you to to the game, where you can sign up.

Audio starts at about 6:45 p.m. on WHLO 640 and Golden Flash iHeart Radio. David Wilson is the announcer.

Live statistics will be on the Akron website during the game.