If you haven’t seen it, here’s Hannah Young’s offensive rebound and feed to Lindsey Thall for a critical 3-point basket in Wednesday’s game.

Lindsey Thall for 3 and the lead! 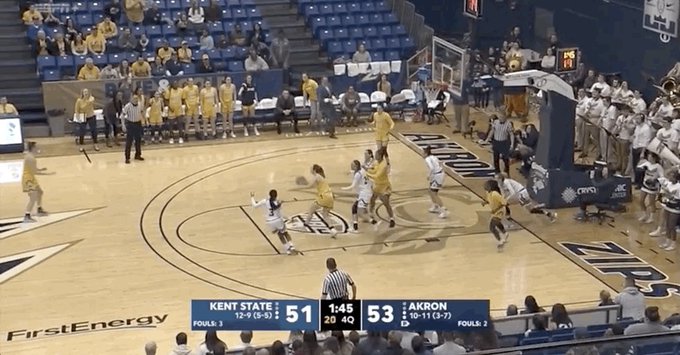 Hold opponent under 40%: 36.9, A good percentages even though it was highest of last three games. KSU’s 3-point defense has dropped from 45% to 35% over last five games. ACHIEVED.

Outscore opponent by five points off turnovers: Akron 15 off of 18 KSU turnovers. Kent State 14 off Akron’s 12. Second half was 13-5 Kent State on points. NOT ACHIEVED.

Have 14 assists: 12 on 23 baskets. Percentage is fine. Total is a little low. Part of that, I think, is Asiah Dingle’s 15 points. Dingle gets many of her points on steals and drives, not on assisted baskets. She made six of seven shots Wednesday. Over last, she’s 18 out of 28 for 64%. For season she’s shooting 46% about five percentage points better than last year.  NOT QUITE ACHIEVED.

Get 10 points from the bench: 21, Dingle’s 15 were the bulk of that, but Hannah Young had four and Sydney Brinlee two. ACHIEVED.

BOTTOM LINE: Quality of play: B+.

The view from Akron

“Kent State is a good team, and we are a good team. We’ve shown that multiple times. We’ve been in every single game in conference play. When we put it together for a full game, we know what we’re capable of.”

“I’m so proud of our kids’ effort. They continued to fight and they worked their tails off. I can’t ask much more from them.”

“Dingle kind of just went through us. She’s quick, she’s tough to guard in transition.”

“You can’t beat a good team twice, and I think we’re a good team. We’re gonna go right into their house, and we’re gonna win. I have no doubt.”

A short video clip that went viral showed Santoro pulling the hair of a Norwalk High School player as the players were running upcourt after Santoro made a 3-point basket. The Norwalk player fell to the ground.  Officials didn’t call a foul; it was unclear whether they saw the incident.

The clip was retweeted hundreds, if not thousands, of times. It was written about by TMZ, the New York Post and the Washington Post, among others, and reported by local newspapers as well as Cleveland and Toledo television stations. Some people on Twitter and commentary websites castigated Santoro and, sometimes, Kent State, where she has signed a letter of intent to receive a basketball scholarship next year. She and her family have received threats.

Santoro apologized for the incident on her team’s Twitter feed. The father of Olivia Ward, the Norwalk player, posted on Facebook that her family accepted the apology. He strongly criticized “hateful, threatening comments” directed at Santoro and asked people to “please stop.”

“I would like to publicly apologize to Norwalk’s Olivia Ward, and all basketball fans in the area for this past weekend’s unfortunate incident. My intentions were never to hurt anyone.

“I know it’s brought a lot of negative attention to our area and the game I love. I will learn from this and become a better person because of it.”

The Facebook post of Jason Ward, Olivia’s father, said the two families would meet in the near future to discuss the incident. He said he had been in contact with Kory Santoro, Casey’s father, who is also the Bellevue girls coach. Ward’s letter read, in part:

“She (Casey) made a mistake, which we are all guilty of at some point, and she will have to live with the ramifications of that. That being said, my family, and more importantly, Liv, does not want to see Casey’s life and future ruined over this.

“As a father, this is not something that I condone, and as a decent human being I find it disgraceful that this kid would be threatened on social media or otherwise….If you are guilty of posting anything hateful or threatening toward this kid, please stop….

“”Sonja and I do our best as parents, and this is a chance to for us and our family to forgive someone, however hard it may be, which we have done and will do in person very soon….

“Liv said to me, ‘Dad, I know how hard I have worked to get where I am at and set myself up for the future. I know that Casey has worked just as hard, and I don’t want to see her to lose everything over this.'”

The full statement was reported in a story in the Norwalk Reflector .

Ward suffered a concussion, her father said, and won’t play the rest of the season. She did start and score the first basket in Norwalk’s game this week, then went to the bench.

Santoro is averaging 25 points a game and recently scored the 2,000th point of her high school career. She has twice been district player of the year and twice been first-team all-state in Division II.

I’ve followed Casey online since she verbally committed to Kent State last February. I’ve never read anything negative about her before. An KSU assistant once described her to me as “tough as nails.” It was a compliment.

After the incident, Casey’s teammates tweeted about her as a great teammate and a good person. Ward’s friends and teammates at Norwalk tweeted the same things about her. Ward has a scholarship to play volleyball next year at Division II Tiffin University.

Here’s the clip (incident is at center court at the bottom):

Here are some earlier stories about Santoro.

When she signed her letter of intent to play at KSU

Kent State, Eastern Michigan and Ball State shook up the middle of the “golf” standings with road wins.

Ball State beat Toledo 60-58 at Toledo as the Rockets missed a jumper at the buzzer that would have sent the game to overtime. Graduate student Jasmin Sanz had 15 points for Ball State. Senior guard Mariella Santucci had 16 for Toledo, including the 1,000th point of her career.

Eastern Michigan won at Bowling Green 70-58, rallying from two points down at halftime with a 19-9 third quarter. Sophomore guard Jenna Annecchiarico led the Eagles with 22 points. Areanna Combs had 20. Angela Perry had 18 for BG.

Western Michigan handed Buffalo its fourth straight loss and broke a three-game losing steak of its own with a 74-62 win in Kalamazoo. Jordan Walker had 18 points for Western. Theresa Onwuka had 17 for Buffalo, whose losing streak is its longest since 2016.

Northern Illinois won its second straight game in overtime, beating  Miami 86-84 at home. Courtney Woods, who scored 20 points and had 10 rebounds, hit a jumper with five seconds to go in overtime to provide the margin of victory. Miami led by 18 in the first quarter. Savannah Kluesner had 28 points, 12 rebounds and seven steals for the the Redhawks.