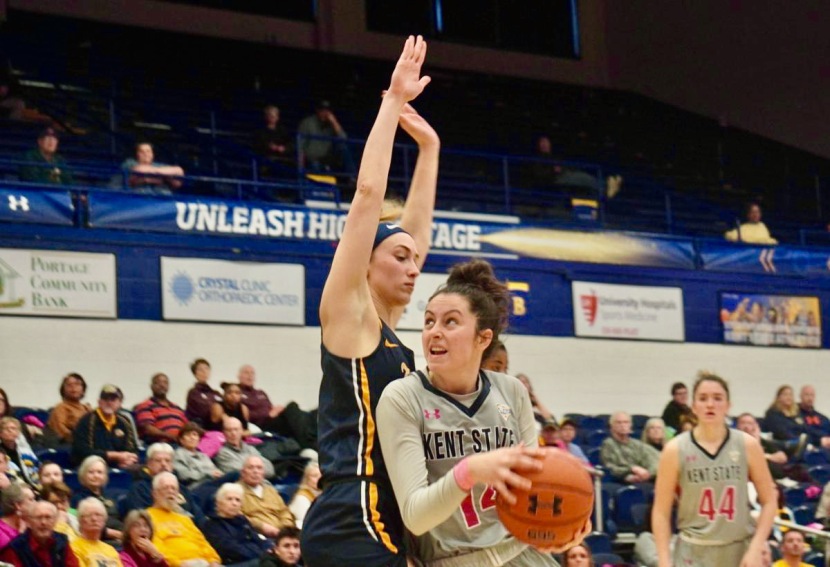 Katie Shumate had a career-high 24 points to lead Kent State in its 87-68 win over Toledo Saturday. (Photo by John Conley from KentWired.)

It’s about a 4 1/2-hour drive. Address is 300 E. Broomfield Road Mount Pleasant, Michigan, if you need it for GPS. Here are directions from the Central Michigan website. and here is parking information.

Tickets are $10 to 12. Parking is $5. Average attendance for CMU’s women’s conference games has been 1,922, second in the MAC. Kent State home attendance is fourth in conference games at 1,870, but that is using the total attendance of 5,200 at Saturday’s doubleheader with the KSU men. There were probably about 3,000 left for the women’s game, which would make KSU’s average about 1,400. That still would be the best in in the 35 years I’ve followed the team.

Central Michigan is 12-0 and at least three games ahead of everyone else in the Mid-American Conference. About the only thing at stake for the Chippewas is a perfect conference season.

A upset by Kent State would be a really big deal for the Flashes. It would mark them as a threat in the MAC Tournament next month, solidify their hold on fourth place in the league and give them a key tie-breaker in seeding in the tournament. First tie-breaker is head-to-head results; second is record against the best teams in the conference.

“Sure,” KSU coach Todd Starkey said after his team’s 87-68 win over Toledo Saturday. “We can also be the next loss to them. They’re very good at home. We’re going to have to play our best game to beat them up there.”

Central’s record is terrific — and interesting. The Chippewas lost their first three games of the season — to consistently strong mid-majors Green Bay and Western Kentucky and No. 9 Louisville. Since then, they are 19-1, losing only to Central Florida, another good mid-major.

CMU’s RPI is 18th of 351 teams, extremely high for a MAC team this late in the season. But the highest RPI team the Chippewas have beaten is No. 46 Ohio, which they did by two points twice. Next highest is No. 51 Dayton.

Almost every MAC game CMU has played (and won) has been close. Eleven of its 12 wins have been by 12 points or fewer. Eight have been by seven or fewer. The Chippewas have had to come from behind in the fourth quarter to win six league games.

Does that mean they’re vulnerable or know how to win? They certainly aren’t as dominant as they were as conference champions in 2018 and 2019, when they won a total of 22 MAC games by at least 10 points.

Kent State is coming off of its best win of the season, an 87-68 rout of Toledo Saturday at the M.A.C. Center. The 87 points were the most the Flashes have scored this season against a Division I team (they scored 92 against Division III Hiram).

No team has scored 70 points against KSU in a month. The Flashes held their three opponents before Toledo to an average of 55 points, though they only averaged 58 themselves.

REPORT CARD ON KSU’s WIN OVER TOLEDO: Flashes did most everything very well.

Central has the league’s most productive offense, the league’s best player and two other players who average at least 14 points in MAC play.

The Chippewas have averaged 80.9 points a game in the MAC, three more than second-ranking Ohio.

Freshman point guard Molly Davis averages 15.6 points and has scored more than 20 six times. She’s fifth in the league in field-goal percentage (51.1), sixth in 3-point percentage and sixth in assists. 6-1 junior forward Kyra Bussell averages 14.1 points per game and is second in rebounding at 6.8.

Two other players — 6-foot senior forward Gabrielle Bird and guard Maddy Watters — have scored 20 points at least once this season.

The Chippewas shoot and make the most 3-point shots in the league. They average 10.4 three-point baskets per game, two ahead of second-ranking Ohio.

Kent State held Ohio to five of 21 three-pointers two weeks ago, but the Flashes are last in the conference in 3-point defense. In the last five games, however, they’ve been much better.

Central’s defense is as close to a weakness as it has. The Chippewas allow 72.1 points a game and are seventh in the conference in field goal defense at 41.2%. (They’re second in 3-point defense at 28.1.)

For Kent State, the key to the game is simply and hard:

The Flashes need to play their best on offense and defense.

And, Starkey told Allen Moff of the Record-Courier this week:

?We’ll need a little help (to win). If they shoot a high percentage, we won’t beat them. We’ve got to play our best transition defense of the season, and we’ll need them to miss some shots.”

It’s questionable whether Nila Blackford, Kent State’s leading scorer and rebounder, will be able to play against Central. She missed Saturday’s game with a concussion suffered in the Akron game last week. Starkey said her status depends on daily evaluations by trainers using the benchmarks of concussion protocol.

Without Blackford, Kent State still scored a lot of points Saturday. Freshman guard Katie Shumate had a career-high 24 Saturday and is ninth in the league in field goal percentage. Sophomore guard Asiah Dingle had 22 and six assists against Toledo. She has played some of the best basketball of her career since she returned from a two-game suspension four games ago. Dingle is third in the MAC with a 52.9% shooting percentage. That’s 15 points higher than it was a year ago.

Sophomore forward Lindsey Thall is among the MAC’s leaders in 3-point shooting, and sophomore guard Hannah Young, who started in Blackford’s place Saturday and scored 12 points, is placing her best basketball.

All statistics are for conference games only, which are more current and reflect similar competition.

Following the game from home

Video stream on ESPN+ starts at game time at 7 p.m. Service costs $4.99 a month and includes about half of all MAC men’s and women’s games. It will include all men’s and women’s MAC Tournament games except those broadcast on network TV This link takes you to to the game, where you can sign up.

Audio starts at about 6:45 p.m. on WHLO 640 and Golden Flash iHeart Radio. David Wilson is the announcer.

Live statistics will be on the Central Michigan website during the game.