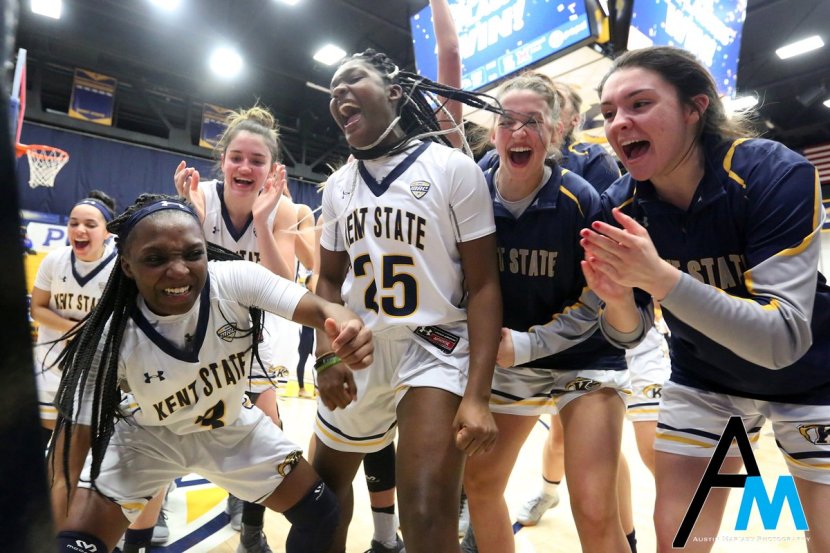 A grand celebration at the victory bell after Kent State’s 67-58 win over 21-5 Miami. (Photo by Austin Mariasy)

All season, KSU coach Todd Starkey has said that if the Flashes could put four good quarters together, they could beat anyone in the Mid-American Conference.

Wednesday, they did so in a big way.

“That’s what we’ve been hunting for a year,” Starkey said. “Everybody needed to contribute to beat that team, and they did.

“Defensively, I thought we were fantastic all four quarters. We did a really good job of executing on the offensive end and getting the ball where we wanted to.”

The Flashes had lost five previous games to the MAC’s top four teams. Usually they fell well behind in the first half and battled back to make it close at the end.

On Wednesday, the Flashes led 18-15 after first quarter and outscored Redhawks in every quarter but the second, which was 14-13.

The 5-4 freshman guard led the team in scoring with 19 points, her third highest total of the season. Her seven field goals in 11 attempts was her best shooting of the season, and she made two 3-point baskets for only the second time this season.

“I’ve been working on the 3s with coach McKee,” Dingle said. His advice? “Step into my shot, follow through high, and make sure I jump.”

Dingle squashed Miami’s last comeback with a drive and traditional 3-point play with 3:11 to go and made a long-distance 3 90 second later.

She and the KSU defense smothered Redhawk guard Lauren Dickerson, who had scored 53 total points in two games last week. Dickerson went 4 of 20 from the field and 1 of 12 on 3-pointers. Kent rarely gave her a good look at the basket.

“Just stay in front of her,” Dingle said of the strategy. “Stay in front without reaching and fouling.”

Dingle, who has struggled with foul trouble, had only one personal  Wednesday.

Thall, a 6-2 freshman forward, followed a career-high 22 point game against Ohio on Saturday with 16 points against Miami. She made six of eight 3-point shots against WMU; she made 4 of 6 against Miami.

“I’ve been getting up extra shots in the gym,” Thall said. “But really my teammates getting me open is why I was able to get those shots in the first place.”

Thall scored 10 straight points in the third quarter when Kent State turned a close game into a nine-point lead. Starkey was most happy with inside moves from Thall.

“She got more aggressive off the dribble,” Starkey said. “We’re really trying to turn her into a multidimensional scorer and not just somebody you could find at the 3-point line.”

“We ran action for her when she was hitting pull-up jump shots,” Starkey said.

That’s a major statement for Carter, who has struggled with believing in herself last times in her career.

“It’s hard,” she said. “It takes consistency and adjusting to what they’re doing throughout the game. We just have to make sure we follow the game plan and whatever coach says on the sideline.”

Carter and Dingle didn’t start for the first time time this season when both were healthy. “Coach’s decision,” Starkey said, declining to elaborate. Carter said it didn’t bother her.

The team’s only four-year starter and its leader on defense, Golden had a strong game without scoring a lot of points. She had eight steals, seventh highest in school history and the most for a Kent State player since 2008. She took four charging fouls.

“That’s nine charges in the last two games,” Starkey said. “You probably can’t find a player in the country who’s had more than five or six in two games.”

Golden also had four assists, five rebounds and no turnovers.

The team’s only other senior and tallest player at 6-foot-4, Barber-Smith had 11 rebounds for the second game in a row. She had five in the third quarter and a total of six offensive rebounds.

“When they’re playing a lot of true post players, she is going to play more,” Starkey said. “She’s so talented a rebounder.”

Barber-Smith also had four points — a good game for her — and a blocked shot.

The Flashes now go on the road for two games against teams they beat in Kent. On Saturday, they play at last-place Bowling Green, and on Wednesday at eighth-place Akron. But both those teams have upset Buffalo on their home courts in the last two weeks.